Apple pie: We were supposed to learn the Cooked Fruit method, but Chef prefers Old Fashioned Apple Pie. In OFAP, the fruit cooks while it bakes. I was paired with T, and he made this one. Having been raised to wash all my fruit, I expressed some surprise during lecture that Chef did not wash the apples before he peeled them. He teased me about this, and said that in the industry, if a chef caught me washing a carton of apples, I would get in trouble. And he said it doesn't matter, since the peel is removed and they'll be cooked, but my father taught me that since you touch the outside with your peeler which then touches the inside as you peel, it transfers whatever is on the outside to the inside. It's not even the pesticides, because we don't worry about that in my family, it's I think the dirt. Actually, I don't know what it is. We've just been taught to wash all fruit. Plus, I love to eat apple peels, so it seems gross not to wash it. Anyway, to core an apple, I'm sure you've seen this on the Food Network, slice it into quarters and then stand it up or lay it down and straight cut the core. 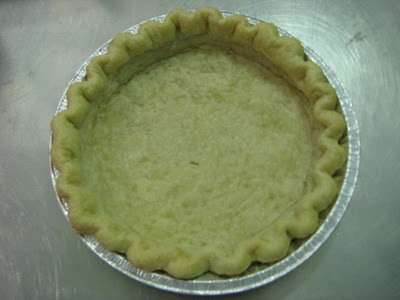 Cut the slices about 1/4 in thick, making sure you're consistent. Mix with lemon juice, sugar, constarch, salt, cinnamon, and nutmeg. Lay the apples in the crust, piling higher in the center. Cut up 1T of butter, and put pieces on top of apples. Pour residual juice over top of apples. Lay crust on top, and pinch together. Use water to seal together. Make sure you make vents, any style you like! Egg wash, and can sprinkle with sugar in the raw. Cover with foil (hole in middle) and bake 45 minutes with foil, and 15 min without foil. Parchment paper is key here, as you can see that apple pie tends to leak as it bakes. You wouldn't want that mess on the oven floor! He did a nice job, don't you think? 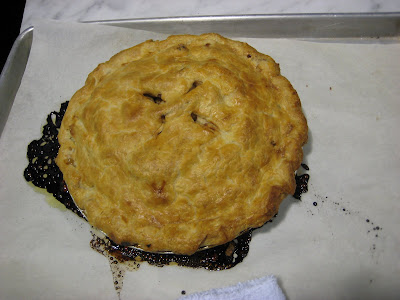 Cherry pie: I made the cherry pie. We used IQF fruit, as usual - it's just easier. This uses the Cooked Juice method. Whisk cherry juice, lemon juice, and sugar in a pot to simmer. Make a slurry - cornstarch dissolved in cold water. Add this to the juice mix, bring to a boil, continue whisking. In a few minutes, it will become gel-like. Make sure you didn't allow the sugar to burn, or this won't work, trust me. I had to start over, because I definitely burned my sugar the first time - it's supposed to be this really pretty clearish pink gel, and mine was dark and some parts were brown. Mix this with the cherries in a bowl, and allow to cool. If it is warm when added to the pie, it will melt the dough.

Blind bake the dough (do this with all pie dough): Cover the bottom crust with 'pie weights' - we wrapped a couple cups of beans in plastic wrap, and lay it on the dough. Bake for about 10 minutes, until the crust becomes white/opaque. Pull off beans, and then bake long enough for the bottom to get color. Dough docking: poke holes in the bottom for steam - otherwise when you try to brown the bottom, it will puff up. You can break the puff, but that then creates cracks in the bottom crust. 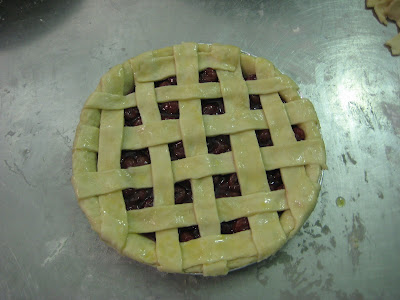 Fill with cherries, then make a lattice crust. Roll out the remaining dough, and cut strips. Lay four to five strips down, then pull back every other one. Lay a strip perpendicular, then return strips that were pulled back. Now pull back the opposite strips, and repeat with a perpendicular strip. In other words, don't picture this done like I always had - where a person will weave through, like a basket. That, not surprisingly, would be very difficult to do. Press down to seal, egg was, and bake closer to the bottom of the oven for 30 minutes. Looks good, right? It was too sweet for me, but I didn't actually taste mine - we sampled one team's in the class, and the rest are saved for orientations or staff meetings. 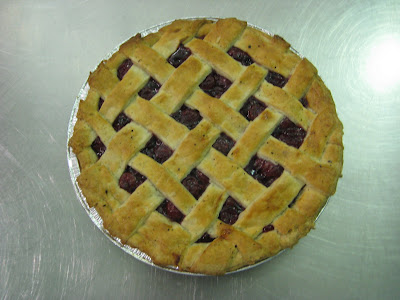 The flakes are from the oven - when T put in the apple pie above mine, some stuff from the oven fell off onto the pie. Oh well. Chef said it didn't matter.

Quiche Lorraine: This is really rich. But good. I read about quiche recipes all the time, but I've never made one before. I actually wouldn't have expected to learn it in baking class, but I guess it makes sense, since the crust is important. Whisk cream, eggs, yolks, salt, white pepper, and nutmeg. Use white pepper so it blends in and there are no specks. Mix bacon, onion, and cheese, and a small amount of base. Pour this mix in the dough, then pour remaining liquid over. Bake for 20 minutes, until when you shake it is seems like set jello. 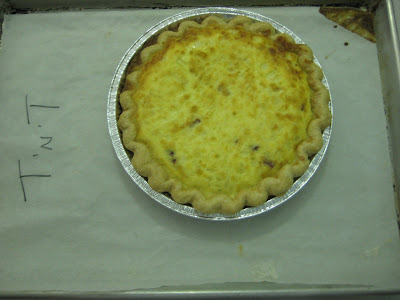 There are two types of pies: mealy (one crust; custard) or flaky (double crust; fruit). Mealy pies are either par-baked or fully baked before filling is added (quiche, pecan, chocolate silk). There are eggs in the filling. Flaky pies are fruit pies.