Friday we made scones, biscuits, and pie dough. We had a grand total of 10 people at class Friday night - everyone else took the night off for the three-day weekend. Their loss - they're going to need the pie dough Tuesday! And class went soooo fast. We were out by 10 pm. Awesome. I was just going to go home, but Rico asked me to get a drink, so Master, Whiskey, Rico and I went to pizza.

Tonight I was paired with T because Tennessee's sister was in town and Irish is back home dealing with legal stuff. And going to a pig picking. As in picking the pig to roast. It's a southern thing, apparently.
I made the bisquits, T made the scones, and we each made a pie dough (me flaky, him mealy).
The cut-in method creates flaky dough. Steps: 1) whisk dry 2) cut up butter into large pieces 3) break up butter into flour by hand (size of hazelnuts) 4) make well in center, pour in buttermilk 5) toss by hand until just together 6) gently knead together
Bisquits: 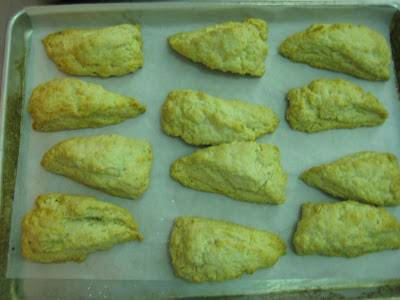 7) if rolling out, do to 1/2 in thick, and cut out rounds (max two roll-outs/cuts per dough before gets tough); if flattening, flatten to 1/2 in thick circle, then cut 12 wedges 8) milk wash with leftover buttermilk drops
Our partner class made a big batch of sausage and bacon gravy. I've actually never had gravy before but this was really good. And mine and T.'s bisquits were perfectly flaky on top. 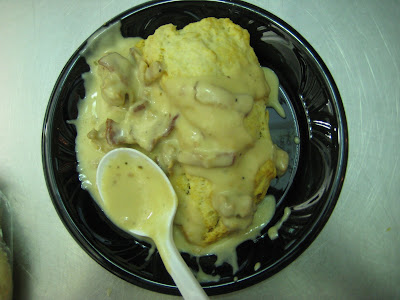 Scones: between steps 3 and 4, can add in flavors (T used chocolate chips and dried cherries). 7) divide dough in half, flatten two rounds, cut six wedges in each. 8) milk wash, sprinkle with coarse sugar. Chef recommends using a heavy cream instead of buttermilk for the scones. 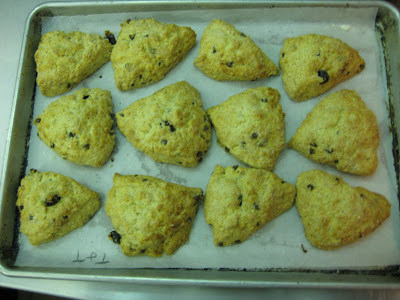 Pie Dough:
Depending on the recipe, you may need either flaky or mealy dough. Follow the above directions for flaky, and for mealy, break up the butter in the flour into tiny pieces, until the dough starts to look like cornmeal. Then gently knead together. We wrapped it up and froze it at this point - pie dough keeps well in the fridge for about 2 days, but once you need it later than that, freeze it.
Scones and bisquits can also be frozen - either the dough or the baked. I wanted to have more practice with flaky because scones are on the practical.
Rico blew my mind tonight with an observation she has made about T. - he never helps clean. Sometimes, he may do his own space, or push a broom, but generally, he does not clean. And no one ever notices. I definitely had not. He works at a pace that allows him to finish right at the end, and then moves enough that no one notices that he isn't helping to clean. Amazing. She made a good point though: why be mad about it? He really wants to be in a kitchen, and this is going to catch up with him on the job. I wasn't mad so much as shocked. I admire T.'s culinary skills, and it amazes me that he wouldn't participate in a major part of being in a kitchen. Interesting.
On another note, my fridge is stocked full of baked goods. And I don't really know what to do with them. I gave some to my dad and mom, but we really aren't much of a sweets family, so I know they'll eat it because they want to taste my product, but I didn't want to give them a bunch of food they won't eat. And I don't really want to bring it to work, because I don't have enough to go around, and so many of my co-workers claim to be dieting. And some of it crumbled, since I bring it home in plastic bags stuffed into my bag so no one sees us "disposing" of it. But I hate throwing food away. It's a serious dilemma, people! I would just freeze it, but let me remind you that I have a 2/3 fridge, and it already looks like this: 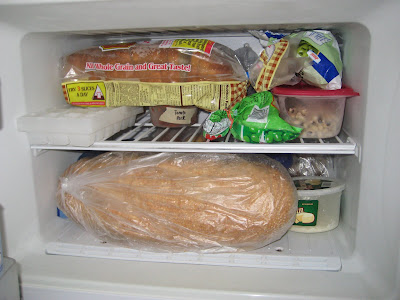 It's a three-day weekend, and I am very excited about it! Not because I have a fun-filled weekend ahead, but because I'll be able to sleep all I want, work out daily, do laundry, and go grocery shopping. Party animal here, people. I have plans with friends that I'm looking forward to, but it's those four things that excite me most about 3 days off from work and school...
So. The boy. The text messaging is still happening, but he had to go to Mexico for work. Two weeks to a month. That's a long time when you aren't defined. And, really, it's longer, since I didn't see him see the weekend before he left due to the wedding. I'm so busy working and going to school full time, but it's amazing how quickly one gets used to talking to and seeing someone...
Oh, recipes... I'll get them up, but I've just been a little busy. I'm not sure if people want recipes, or just more instruction on methods.
Lessons Learned:
Things go a lot quicker when there are less people in the kitchen.
The amount of sugar is the only difference between bisquits and scones.
Posted by T at 5:11 PM

i wish i were there to help you clean out your freezer! i love baked goods. :D