Thursday I stayed home from work, but by the time it was afternoon, I wasn't having any more trouble swallowing and I really didn't feel like I could miss another class. I was a bit testy toward people, but that's because of different stressors.
Anyway.
Wednesday I missed Starch and Vegetable Salads, which are going to be on the Final Platter presentation, but we're doing that in groups of two, so I'm hoping I get paired up with someone who was there that day. I also apparently missed a quiz.
But look at the flowers Irish brought me! 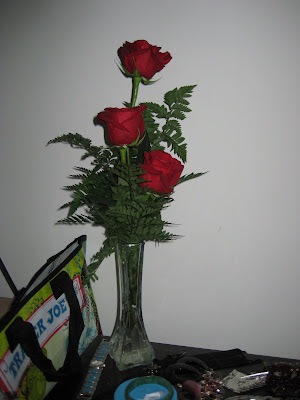 She's taking a flower arranging course during the day, and she gave me a "Freedom" Rose arrangement because I was out... awww. She's so nice.
We brined Duck Breasts to be smoked tomorrow, marinaded shrimp in bourbon and hot spices to smoke, dry cured salmon to smoke tomorrow, and smoked trout.
I did the smoked salmon cure. But, of course, we didn't actually have enough proteins, so instead of having 1.5 lbs for each team, I had to take one salmon filet and quarter it. And then I shared our group's with Army because there was none left for his group.
I asked Chef if I could make up the quiz, and he said "right now?" And I asked if I could possibly wait until tomorrow (since I didn't know about it, was still a little foggy, and had had no chance to study), and he said that was too late because he wanted to put the grades in and hand the quizzes back. "Um, okay, then I guess I'll take it now." It was fill-in-the-blank about salads. I think I knew maybe five answers. Out of 20. Seriously. I hadn't looked at those notes since I took them in class. That should be an interesting grade.
There really wasn't that much to do today, so we were all kind of dilly-dallying, and then he lectured for a bit, and then we smoked our meats over mesquite chips. This can be done indoors, like we did, but you need to have excellent ventilation. This is our shrimp: 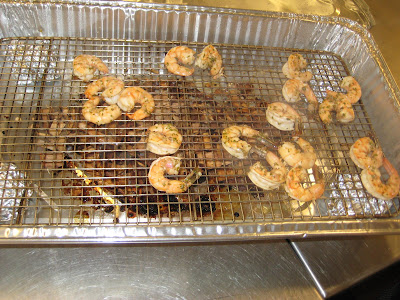 So, we're standing there eating them - because bourbon with hot sauce is an amazing combination, thinking we only had to save four because that's what he said, and Chef is standing right there as we're eating, and when there are only about 6 left, he says, "you know you need 4 each, right?" Well, no, how would we know that? You said that we needed 4. And you are watching us eat. So why wouldn't you mention "4 each" in the first place when we ask you how many to save? I don't think he's doing it to be mean, I just don't really know what's going on there. He did mention he's on a lot of medication because of a fall off of his bike, and he is working doubles. So maybe he's just tired.
Lessons Learned:
Missing days of class is stressful. I feel like I missed a lot of information, and his lectures don't really make sense, so borrowing someone else's notes doesn't really help.
Posted by T at 12:39 PM