We had another quiz tonight. He told us to study canapes and smoking/curing, but the quiz was on canapes and sandwiches. I think, though, as a result of everyone's scores on the previous quiz, he thought it would be best to review directly from the quiz. So I might have pulled off a B. I don't really have the best attention span, so even though he was reviewing, I wasn't listening all that well. I really should fix that behavior.
Anyway. I switched teams this night. I worked with Whiskey, Rico, and Irish. Irish made the Aspic Gelee, Whiskey made the Gazpacho Andalusia, Rico made the Cantaloupe soup, and I made the Vichyssoise.
I guess I am able to cook again, since breakfast foods went well, and so did the soup. Vichyssoise is a cold potato soup. I don't usually like cream soups, because I think they're too heavy, but this had less cream because the potatoes help make it thick. 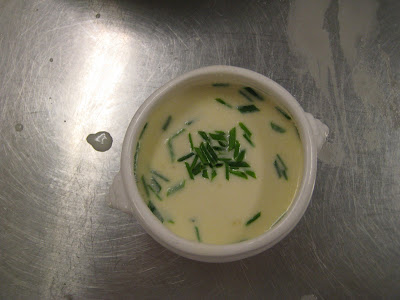 Sweat leeks and onion, then add the sachet (remember: bay leaf, black peppercorns, parsley, and thyme), potatoes and stock. Bring to a full boil, then simmer until potatoes begin to fall apart. Remove and discard the sachet, puree mixture. Mount in butter and cool rapidly. To finish for service, add in half and half, fold in chives, and season to taste with salt and pepper.
All these soups require pureeing. I bought myself a hand blender, which is how I would do this at home. I highly recommend investing in one of those! That way you don't have to make a mess ladling into a blender and then pouring back out again.

We also made a Lime Granite for the cantaloupe soup. This didn't freeze well during class, so we left the cantaloupe soup for the next night. When Irish scraped it up the next day, I had to stop her because she was accidentally scraping up the aluminum from the sheet pan - those curlies were sharp! A granite is just water, sugar, lime zest, and lime juice combined in a shallow pan. Stir evey 25 minutes so it doesn't freeze solid - you want it to be more like slush. 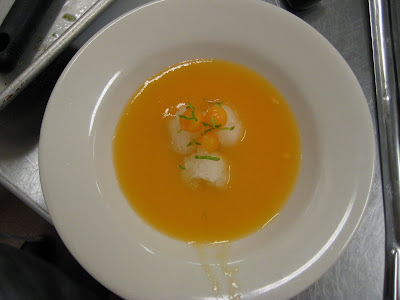 So we have this class next to us, they are also doing the certificate program. There's this one boy, he asked me during baking to send him the photo I took during our huge fest, and he said he would give me his e-mail later. But he never did. But he always smiles at me, and he has a really cute smile. It makes me feel really shy - I always blush and duck my head.
And then there's this other guy. I was in the dish room one night, and this older guy says to me "Smile. I bet you have a beautiful smile." Okay. I hate being told this. I have been told it my entire life. What the hell do people want? Me to walk around with a goofy grin on my face? I smile when I want to, not just randomly. Anyway. Later, this younger guy says something similar to me, and I snapped at him. So then he started saying hello to me before and after class. And this night, I was alone washing dishes, and he came in. He wouldn't come near me, and asked if it's okay - apparently he's worried I'm going to hurt him. I just said I don't believe in violence - not mean or anything. Now, I realize he was flirting. But I'm still sick, and I'm tired in class, and, oh yeah, I kind of am not a fan of boys right now given the way The Boy has been treating me lately. So I don't really feel up for flirting. And then, I was in there alone again, and he came in again, and said we keep running into each other, and what soup did I make? lo and behold, we made the same one... I guess it's fate. Or just that we share the same dish room.
Lessons Learned:
Cold soups are really good and refreshing! I highly recommend the cantaloupe soup for a hot day in summer. Let me know if you want the recipe. But don't eat this vichyssoise unless you can brush your teeth a couple of times: chives, leeks, and onion? That's a strong flavor!
Posted by T at 5:56 PM

What's going on with The Boy?

Do you know I never saw this? Still the same question it was back then!