Thursday we finished up the final practical - Tennessee and I had good teamwork tonight. We were graded on different categories - I can't remember the exact ones, but he graded our aspic gelee, the design/layout, clean/organization, timeliness, color, pate/terrine/galantine, and canapes. We did well on the design (he described it as "forest-like" - between the two layers of gelee, I laid down patterns of parsley. It looked really pretty! 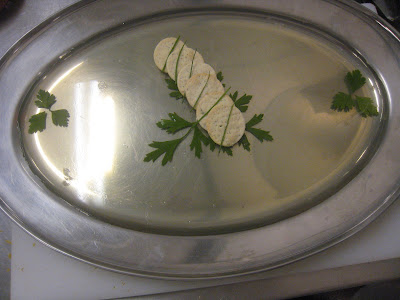 I didn't really want to put anything on top of it), timeliness, clean/organization, and gelee. We lost some points on the actual food because they were lacking in color (not enough visible red in my galantine and the canapes appeared "messy"). I thought the platter looked a little crowded - we hadn't grabbed a platter quickly enough on Wednesday, so we had to take one of the smaller ones. 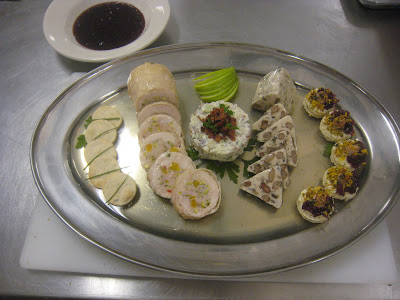 The cute boy next door (who I am now nicknaming Simon because his name is in a Simon & Garfunkel song that I always want to break into when I see him): He invited me to look at his platter and encouraged me to eat some. But, I had the exact same platter, and I had done enough sampling of my own. I know, I know, it was flirting, I should have responded, but I was full! And flustered! The boy makes me tongue-tied! He let me borrow a bisquit cutter because I really admired the way he had plated his salad - and I knew it would hide that I had not done a very consistent job of cutting my potatoes...

Ugh, we got out late again - it probably was even later, but at midnight, I told Chef I had to go, and he let me (another student also had to catch her train, so he didn't ask me for an explanation).

Oh! And we had a pop final! Okay, so, technically, he mentioned that we would have a written final at the beginning of the course, but, Chef, if you do not remind students the day before, how can they be expected to prep for it? Especially if they work full time? Anyway, guessing I failed it. Damnit. I am totally fine with doing bad on tests when I refuse to study, but when I don't even know one is coming...it makes me upset. He let us review our notes after T requested, but by then I was in panic mode and also, five minutes does nothing for me in terms of studying. I actually went up to him and apologized later for what I predicted my grade would be - not sucking up because I wasn't looking for him to give me extra points - but just because it embarrasses me as a student. Ohhh the training I have received throughout my years of education. Chef said I shouldn't worry about it - there was a lot to learn in the class and it's only a few percent of the grade.

Ha! I just checked my grade - somehow I managed to pull off a B. Now, Chef did tell me that lab grades and the final practical matter way more than tests. I wonder, if I hadn't failed the first quiz and the final, could I have pulled off an A even with my absences? Maybe not.

Well, I definitely will not be working in catering. I find this stuff too tedious and not very rewarding. Why would anyone want to eat something with the gel on top? Granted, I did not taste it, but it made everything look plastic. The canapes, those were really good. When he was grading us, Chef said he would never eat this stuff - he doesn't like it! Isn't that funny? He teaches the class but he has no interest in it? He said he'd much rather make and have things like mashed potatoes.

Chef was a really nice guy. Still a little boring, but when you got him talking about cooking and his experiences, he really was so cute with his enthusiasm and love for this stuff. He really wants to teach us again for Culinary Skills 2, but right now we have a different chef on our schedule. He says if he gets the class next door, he will definitely be cracking down on them - he hates that they aren't in full uniform and that one student is clearly an alcoholic and under the influence during class. By the way, duh, that's dangerous.

Master and I are planning to pair up for Baking II - coming up next. She and I decided that in order to keep our friends, we cannot partner with them.

And I'm looking forward to having a Friday night off! Yay! It will be a whole new world - I can take a nap and work out and hang out with family! Fun!!

Here's some from other people. I think you can click on them to make them bigger. 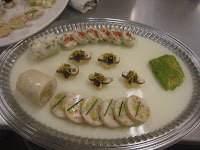 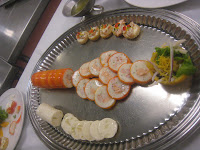 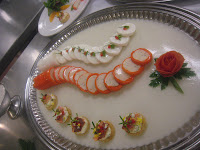 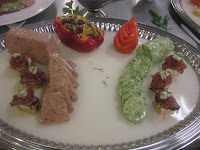 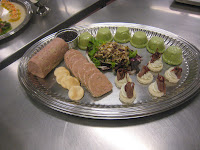 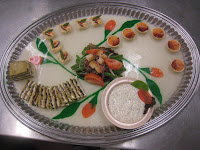 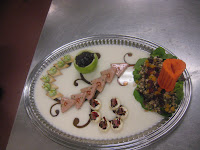 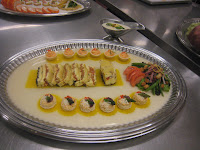 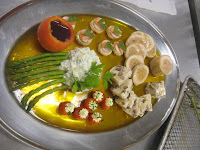