Chef decided tonight's simple egg recipes did not need to be practiced (scrambled eggs, sunny side up, over easy, over medium, over hard, American omelet, French omelet, and shirred eggs).

We worked in teams of four - me, Nemo, T. and Tennessee. I made the Frittata, French toast, and crepes. T. made the spinach souffle and potato pancakes. Tennesse made the crepe batter and German apple pancake.

Tennessee made a German Apple Pancake. Doesn't that look good? She mixed together eggs, milk, flour, salt, lemon juice, butter, dark brown sugar, and cinnamon. Then she baked and it puffed and browned. She made a simple syrup and warmed the apples, and poured them on top after the pancake was completed. 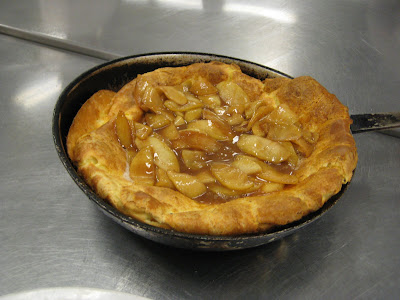 This was my second try at the crepe. 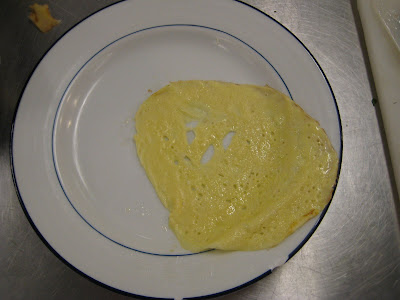 Compared to someone else's batter, I think our's didn't sit long enough - I don't know much about crepes, but our's seem more like really thin omelettes while their's looked like the ones at the store.


Mmm. I did a good job! My French toast was really good. 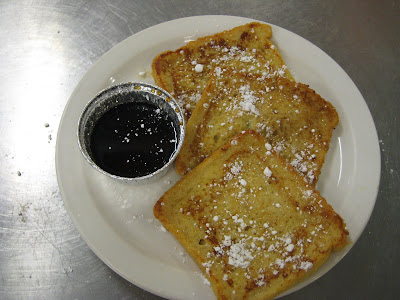 Can't you just picture biting into it? That's real maple syrup - we had this giant brown jug of Kraft syrup, but Chef K had the real stuff, and Irish had gotten some from him and gave me her leftovers.

These are the potato pancakes. 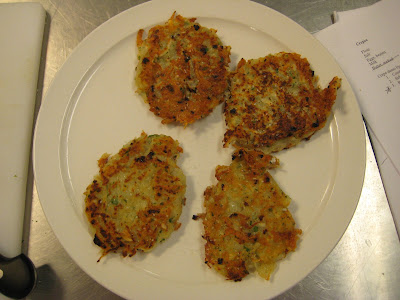 I don't know the recipe, because Chef just demoed it, but grate some potatoes, blend in spices and flour with hands, then brown on a griddle. Mmm salty.

This is my spinach frittata. 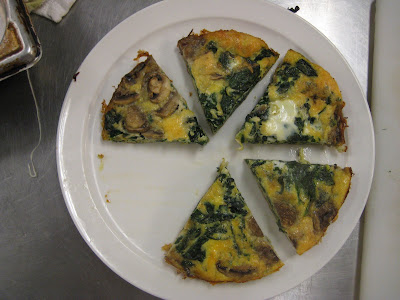 Wilt spinach, add mushrooms and cook until light brown. Cool. Beat eggs and pour into oven-safe pan. Add in vegetables, and push under egg batter. Cook in the oven. Slide the frittata onto a plate and cute into wedges - make sure to serve before it deflates! 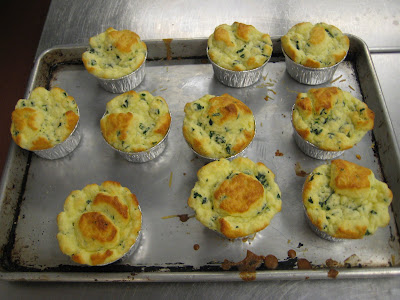 In the bowl, it looked like the whip had fallen and it wouldn't rise in the oven, but it managed to work! I didn't have one - too much food at that point. And you can't save them for later because they fall.


I had to drive to my parent's home after class because I had a conference out by them in the morning. It was just easier doing the drive at midnight than sitting in traffic on the interstate in the morning.
Chef is turning out to be a really nice guy. I think his meds and the pain really got to him last week, because he's been a little more lively this week. He tells stories about his catering of parties, and he's so cute - he gets so excited explaining the menus he's created.
And Chef K, from Culinary I, he's teaching the class next door, and he's always coming over. Supposedly, as a class, we make quite the impression - our chefs love us.
Lessons Learned:
Even when there appear to be a lot of recipes to finish during class, if you work together and divide duties, it isn't really that hard to finish.
And we've been getting out around 11:30 every night - which is great. Just that extra 15 minutes allows me to get to bed around 12:15 or 12:30. I'm still tired the next day, but it's nice to get those 15 minutes.
Posted by T at 5:20 PM