Tuesday we practiced for the final. We took what we made Monday, and came up with platter designs. Other teams are making really fancy things, but I don't really see the point and I'm not feeling very artsy at the moment.

So the other reason I wish we took a week off occasionally - I tend to get annoyed with people when I spend too much time around them without breaks. I'm someone who needs their space, and especially this class, where every night has been partner or group work, I just haven't had that.

Anyway, I found out tonight I am paired with Tennessee for the final. Which, if you were Chef, would seem like it makes sense since she and I have been paired up most nights. But I've been getting frustrated. I know I don't always give the best effort, but when it's time to get down to work, I do.

This is the walk-in: 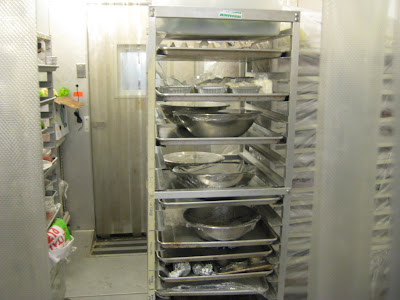 Lessons Learned:
At the beginning of class, I was just chatting with Tennessee, but eventually I wanted to actually practice - we have been assigned a meat-heavy final, and I hadn't made any of the dishes on the days they were on the menu. So I practiced making the aspic gelee glaze (a specific ratio of powdered gelatin to consumme), and after she to make the gelee that would cover the bottom of the platter, she didn't try anything else. I screwed up the glaze, and then tried again. And then tried making the crackers. Which I also screwed up. 3 times. But Tennessee, she wasn't doing anything. And then she kept saying "we" weren't doing anything, but I was - at least I was trying to! And then when I finally asked her to try making crackers, she kept trying to tell me my dough looked fine - but I knew rolled out, it would not work. She finally made some, but only near the end of class. It sounds silly, but my grade depends on her making at least a little bit of effort...

I didn't want to tell her to work - we're friends, and I understand not feeling like working. And I was having a really off night, and thought I might be mean if I opened my mouth, so I just kept my mouth shut.

So I just tried to keep to myself. Which I probably did not do that well. I think it was obvious I was irritated.

But I'm not the only one frustrated with partners. Several other people have mentioned frustrations as well.