Wednesday we began working on the final.

I was irritated again tonight. I began working right away on the galantine because Tennessee had been absent that night. The galantine was freaking me out because I can't seem to remember how to get the skin and meat off the chicken using Chef's method. But Rico and Irish quietly gave me some tips, and once I got into it, it seemed to come off okay. But while I was doing that, Tennessee didn't seem to be doing anything. She settled into working after about 45 minutes and eventually my irritation went away. She was complaining about things where I didn't really see what she had to complain about (how long it took her to find ingredients - um, it didn't take the hour she claimed and really, it involved her going into the next door kitchen. So what? I do that almost every night). It took me about 2.5 hours to finish the galantine. That is a long time to work on one thing that I won't even eat. At least with cakes you can take breaks.

So during that time, Tennessee finished most of the rest of our menu, and they tasted good. Whoops, we accidentally burned our beans, but then it turned out they were done. And Chef said he's not tasting any of our food, so we figured, why not keep it? Ha. Clearly, we don't care as much as other teams.

Tennessee really did so much in the time it took me to finish the galantine - I just get irritated sometimes, but I know I'll get over it. 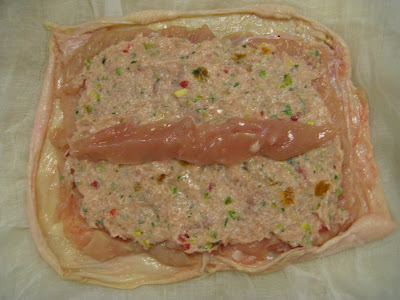 Tonight we made the galantine, brined the chicken (there was no duck), made the dressing, mixed the mousse, made the sauce, and made the cracker dough.

We got out late tonight - I didn't get home until 12:15. I did get in a brief run (and I mean brief - just 18 minutes) in the afternoon, and that might have helped keep me awake. But I'll be tired at work on Thursday.

Tomorrow will be busy - we have to finish the canape spread, smoke the chicken, bake the crackers, poach the mousse, make the salad, design the platter, and plate it! That sounds like a lot, now that I write it. You'll see the final tomorrow!

Chef made us chicken cacciatore and mashed potatoes. 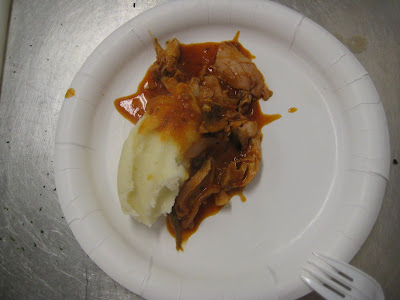 Today was Nemo's birthday - Irish made him a red velvet ice cream cake. She's so sweet! It was good, too. That was really good. 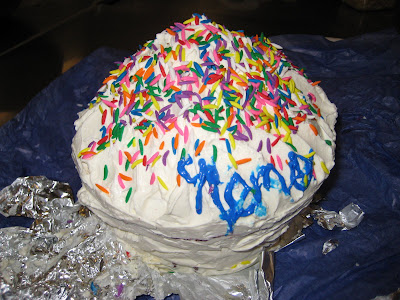 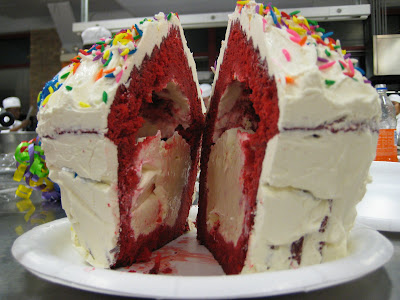 Lessons Learned:
Apparently, around midnight, red lights are optional. Somehow I must have missed that lesson in driver's ed. It's best not to think about the other drivers too much, or I might be afraid to get in my car.
Posted by T at 12:27 AM