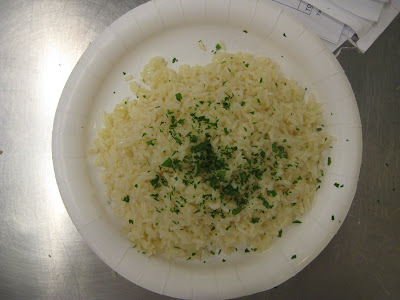 I think I got 18/20. I don't really pay attention because I tend to be more focused on eating.
There were no green beans, so we made the sauteed spinach instead, which I really like.
We also made the risotto. He said mine was al dente, but I still don't like it, so I just threw it out. Chef K. says it's an acquired taste and I don't like it because I like the pilaf so much (ha. see below).
And we also made ratatouille. Mine was underdone. I don't know why. I think it was the eggplant, but he wasn't specific. I just couldn't get it right this time. Oh well. That's what learning is.
Here's another picture of the Riz au Pilaf. Because I'm totally obsessed with it. Seriously. Make it. It's awesome. If you need more detailed instructions, let me know. I'm happy to share.
We had a lot of time to spare for this practical. It went 9:00 Pilaf 10:00 Risotto 10:30 Spinach 11:00 Ratatouille. And we started at 8:00! Once I had cut all the vegetables for the Ratatouille while my Pilaf was cooking, I just kind of stood there. Chatting, of course, but I was restless. It wasn't Chef's fault - he was trying to give us plenty of time for the Risotto. Oh, but I did talk to Chef about how he was a food scientist for a week - he recommended I put my resume on Monster after I complete the program. He said corporations are always looking on there. So, I can do that, and if I get the chance to change my career....hey, I'd think about it!
We were supposed to have a quiz on Vocab 4 (types of cooking), but he moved it to tomorrow. Which was good, because I hadn't studied. I've kind of lost my interest in studying for anything. I figure I'll learn those terms as we use them...
Lessons learned:
Point out that people cut in line in front of you, and that's why your dish is not as warm as it should be. And, fine chopping parsley can be your best friend. Look how pretty it makes a dish!
Posted by T at 12:36 AM