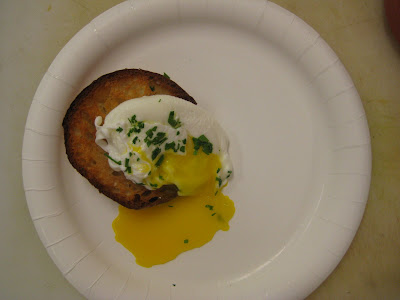 I kind of had a breakdown in class last night. Only a minor one though - I think only this girl at the back table really saw it. And she only saw it because she was standing right next to me at the stove and told me "it'll be okay, it's only eggs," to which of course I burst into tears...
Backing up: I have a lot of trouble cooking eggs. It seems so easy, but I just can't get it right. All we had to do was make 2 over easy, 1 over hard, 1 boiled, 1 French omelette, 1 American omelette, and 1 poached.
I started with the boiled, which is 5 minutes at boiling, 10 min off the heat, then 5 in cold water. During that, I managed to throw away about 5 eggs as I tried to make a French omelette and over easy eggs. I can flip the egg in the pan okay (tip to the edge, then flip wrist), but I kept browning the bottom, and over easy have to have no color.
That was where I kept screwing up - I have a lot of trouble controlling the heat on these stoves, so things were browning when they were supposed to have no color. They are really high heat even when you think it's low, and then with the vent fan and air conditioning blowing, sometimes they go out or your's is being heated by the one next to you...
I should take a picture of the kitchen, but all the stoves are on one side, and we have about 20 students, so it gets really crowded.
Over Easy: Crack an egg in a bowl, then slide into lightly buttered nonstick pan. 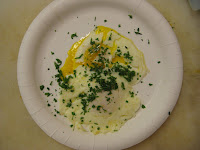 Allow to set slightly, then slide the pan to make sure the egg still moves off the bottom. When set, flip. Allow the other side to set (just about 30 sec), then take out. Yolk should be runny.
Over Hard: Same as over easy to start, then crack yolk and flip. Allow to brown, and can flip one more time. I didn't actually make this. If I can do the over easy, I'm assuming I can make the over easy. This may be a very wrong assumption. Yolk should be set.
French Omelette: Whip two eggs with fork in bowl until can lift fork and a stream drops from the fork. Pour into a buttered nonstick pan. Allow to set slightly, then stir with bottom of fork (kind of like scrambled) in the center to get top to the bottom to cook. Leave alone. Take on and off the heat. Then gently tri-fold, starting at one side then the other. Put plate over pan, and flip onto plate. Should be slightly runny in the center, but tightly folded. Okay, I just could not get this. Mine kept getting color on the bottom, which is why I had the breakdown after my second try (which was after my two tries on the over easy, one boiled, and one poached). Irish helped me because she's made a lot of omelettes, but it still wasn't good enough to show Chef - it browned also. But I think I understand the process.
American Omelette: Whip three eggs. Similar method to above, but it's okay for it to brown. Place filling on top when egg is set, then fold in two. Ummm I never even tried this. I don't really like omelettes - and I was really starting to feel ill from the smell of eggs at this p 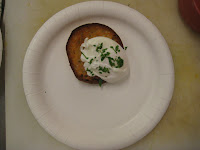 oint.
Poached: Chef helped me to figure this one out. I think there are things I am either missing when he says them in lecture/demo, or he doesn't say them...it's possibly both. Bring to boil water and 2 T of vinegar, and a little bit of salt. Swirl the water with a large spoon, then drop egg into the center swirl (again, having cracked it into a little bowl). Leave it alone! Mine looked like cool little satchels or purses, or even a jellyfish. But it worked! Even the one I made after Chef told me to do one by myself.
Simmered in Shell: The second one I tried to make apparently was cracked, because when I went back to check on it, the white had leaked out and was puffing around the shell...
That's when I completely gave up for the night. Sometimes, it's just not one's day. So I spent most of classtime socializing. Nemo had an emergency at his job, so I lost my pancake partner, which, at that point of the night, I really didn't care anymore - like I said, I felt kind of ill. I tried some of Irish's, but they were a little too blueberry for me. Syrup sure does taste good when you rarely have it, though - made from scratch, of course.
Chef told me I should keep trying, because the French is going to be on the final, but I told him (not bitterly) that I'm really okay failing one practical - he just chuckled, and said he knows I don't want to work in a kitchen, but I should really know how to do this. So I promised to practice at home. We'll see if I have time.
Clearly, I'm using nicknames, because I haven't asked permission to use people's names. Besides, I love nicknames.
Lessons learned:
Take a break when you need it. But that's the psych lesson.
Hard boiled is not called "hard boiled" anymore - it's "simmered in shell." I couldn't tell if Chef K was kidding, but he said they don't use that term anymore because it's considered too violent. But I asked him a lot of questions, and I think he was telling me he wasn't kidding.
Vinegar is used when making poached eggs to keep the whites white and quickly coagulate the protein.
Posted by T at 9:11 AM