I love rice - my mom has always made really good rice. It made the house smell wonderful before dinnertime. When I get to breads class, you'll see how much I love carbs - we are all like that in my family.
Anyway.
The food:
Riz au Pilaf 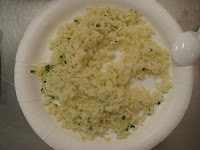 Sweat onions, then stir to coat medium or long grain rice in butter. Add water, and bring to boil. Then we placed it in the oven (covered). It can easily be done on the stovetop, but this gave us additional space to work. I kind of forgot about it, but luckily looked at my watch at just over 20 minutes, and it hadn't burned. This was the most perfect dish of rice I've ever had, even though Chef said it was just overdone. He said it was perfectly seasoned, and then I told him I had forgotten the thyme - whoops! But he hadn't noticed, so it's all okay... Don't forget to let the rice sit for 5 minutes, then fluff with fork.
Risotto 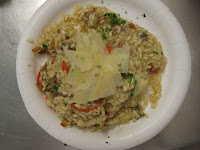 It's important to use arborio rice for this dish. I don't really like risotto - there are too many competing flavors, and I happen to like my rice just lightly flavored. Anyway, we flavored it with bacon, white wine, red pepper (from the night before), and mushrooms. Risotto requires a lot of attention - constant stirring to reduce the liquid - only adding one or two ladelfuls of chicken stock at a time until the rice is cooked. That might be parmesan on the top. This will also be on the practical.
Mixed Grain Salad 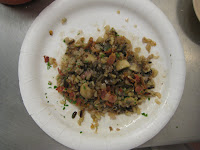 Chef cooked all the grains for us ahead of time (pearl barley, wild rice, and bulgur wheat). Then cook bacon, shallots, and mushrooms with 2-3 T of grains (each) and red wine vinegar. You can cut down on the bitterness of the vinegar by adding sugar. As I've said, I don't like the taste of vinegar, so I used this step. Chef said it was the perfect balance, and I ended up liking this.
We had an option to earn extra credit by making Tuscan Bean Soup, but I've made this before at home and I didn't really feel like cutting up the vegetables. It was Friday night - I wanted to relax a little bit.
Lessons learned:
Pay attention to your watch! We don't use timers, so we have to learn not to lose track of things while we're cooking other dishes.
And again with the excessive "ditched" dishes! This really bothers me. I know people are worried about getting their dishes done in time, but we always end up just standing around for at least 15 minutes before break, so it's not like they couldn't wash their pots instead of saying "hot pot hot pot" and just putting it on the counter next to the dishwashing station for some unsuspecting person to touch and burn their hand...That's just mean, people!
So, as an aside, I have developed an appreciation for the value of text messaging. I used to hate it. But lately I've been messaging with someone - a boy of course, is it ever not about a boy? And I totally get how fun it is. Unfortunately, I just realized today that the reason my box fills up is because I only pay for 200 messages a month - something I have never before reached. But...in the past week, I think I have managed to double that. At 10 cents a message...this is going to be an expensive cell phone bill! I think I'll call tomorrow and upgrade to unlimited. I'm hesitant to do this because that's $15 more a month and I don't even really know how long this boy is going to be around. But if I can maybe get them to apply it retroactively (which I'm pretty sure they won't, which is understandable), it would be nice. And if he's gone next month...well, that's just a phone call to downgrade. Oh dating - a heart attack waiting to happen in my life.
Posted by T at 10:06 PM