Due to the excessive heat, and the inconsistent air conditioning in the kitchens, Chef has been kind enough to move us between open kitchens for class so we aren't sweating more than necessary. Which is much appreciated, since being in front of the stoves, grills, and deep fryer is hot enough.
I also switched tables today - I decided I couldn't really handle some of the competitiveness at the other table I was at. I mean, they're all nice people but they rush rush rush and it gets to me - I feel very pressured, and I realized I was rushing when I did not need to. Plus one of the guys at that table is a little too loud for me - nice guy, but I don't feel like dealing with it. So I switched tables, which was easy to do since we were in a new kitchen and the tables were all different. Now I'm with a group that is more relaxed and more interested in sharing - we get each oils, salt, and vegetables to share rather a "to each his own" mentality I felt at the other table. One of the girls is just out of high school, and when she was asking what I do, she said she had thought the second she saw me, "why is the social worker here?" Ha. The other person there is a boy nicknamed "Nemo" by the high schooler, because his name is close to that. I convinced him to start parking on the same street as me so I have someone to walk down the alley with me after class. We don't get out until midnight, and the school butts up against a housing project that has not yet been completely torn down. I don't feel unsafe, but it is summer and hot out, so it's better to have someone with me.
Anyway, the food:
We made a lot today, but two went into the oven, so they really didn't need that much attention.
Les Epinards Sautes (Sauteed Spinach) 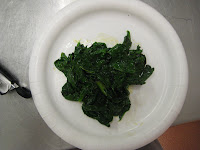 I love spinach. This was realy simple: olive oil, spinach on high heat for about 15 seconds, and salt. That's it! But so good. See, cooking is so easy - I don't know why people avoid it! 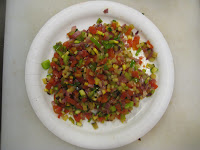 Awesome movie. I need to buy it. Awesome dish - so colorful! Small dices of onion, green pepper, zucchini, yellow squash, eggplant, tomato, and garlic. Cook the eggplant first (after onion of course) because it takes the longest. Chef described the winter version as mushier, and the spring version as tender. I went for the spring version, but since I forgot to add the peppers until I added the squash, it was a little too crispy. But still really good. This will be on our practical Monday.
Baked Acorn Squash 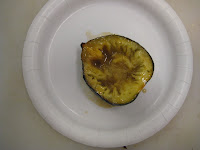 Cut an acorn squash in half, spoon out the seeds, and fill with butter, brown sugar, and salt. Then bake. It becomes really soft and sweet. This will become the filling for our ravioli on pasta day. 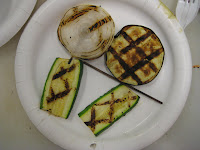 This was just to practice grilling technique. I didn't enjoy this - the hottest part is at the back, and since I'm not tall, I felt like I was burning up my arm to turn the food. We were trying to get the criss-cross impression (quadrillage). I screwed up my first one, so I just threw it out without showing it to Chef, and tried again. That time I did better. I didn't eat these because we were then supposed to make a marinade using balsamic vinegar, but I don't really like how that tastes. It was only a couple pieces so I didn't feel bad throwing it out.
And no pictures on these:
Roasted Garlic
Cut off the top, pour on olive oil, wrap in aluminum foil. Stick in an oven until soft. When done, push out of the skin. This would go in a dish for the next night.
Roasted Red Pepper
Place the pepper directly on the stove, turn it on high. Burn every part to a crisp, making sure no ash develops - that means it is overdone. Then place in a plastic bag and tie; the steam will make the skin easy to come off. Any remaining black can be scraped off with the back of the knife. These went into the risotto on grain day.
Lessons Learned:
There's no need to rush - Chef gives plenty of time to complete the dishes. And grills are hot, so being really nice to guys who have longer arms is important because they will then turn your food for you. And allow the garlic to cool before trying to squeeze it out - you'll burn your fingers otherwise!
Posted by T at 9:33 PM