It's pretty simple, really. I love being a psychologist, but I needed something outside of work since I get out at 3 pm. So, naturally, I take on the totally insane idea of attending culinary school Monday through Friday nights, from 6-11:45. Awesome. Once work starts up again in August, I should be a barrel of fun to be around!
One week in, I am so far glad I made this decision. I'm in a state sanitation class, which seems to make some people terrified of food, but kind of like the documentary about McDonald's or the book Fast Food Nation, it just doesn't bother me. I will still leave the classroom hungry. I'm also taking Introduction to Culinary Skills, which is basically a knife skills class, and basic introduction to simple foods.
This week, we learned how to cook potatoes in many different ways. We had our first practical Friday - I didn't plan properly for the timing of the dishes, which had to be served hot - I was ready way too early.
Pommes Tournees au Vapeur - Boiled Potatoes with Parsley
Make little potato balls with a melon baller. Boil. Season. Really not that interesting, but apparently people will pay lots of money for small things! 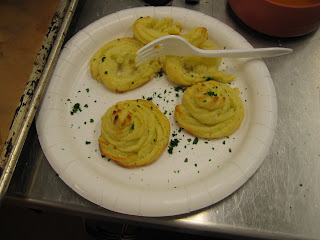 These require piping, which I have never done before, and found really difficult to control. Luckily, Chef K. decided last-minute to not have them as part of the practical, because I would not have done well. 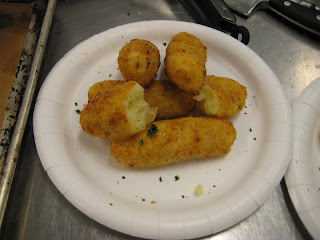 These I wish had included on the practical, because I did really well on them. They tasted fantastic. Imagine mozzarella sticks, only with potato instead. We used the same food-milled potatoes from the Puree. 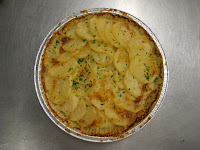 I was pretty surprised with how much I liked these, considering they use heavy cream. The lesson here, I think, is both learning to layer evenly and how to brown and cook evenly without burning the bottom. Apparently, they looked so good that a tablemate accidentally ate mine instead of his... 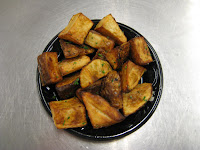 I thought these looked overdone, but Chef K liked them, and they did taste pretty good the next day for lunch after staying up until 7:30...but that's a story of another day. Take new potatoes (generally smaller) and quarter. Cover with olive oil, and stick in the oven.

We also made these, and I really liked my final product - the seasoning was right on. But I forgot to take a photo because I was so hungry and I had been licking my plating spoon...

Pommes Rissolees
I had trouble with these. You have to cut the five even sides into each potato half. That is really hard. And then I couldn't get them to brown properly. And while I was trying to brown them, Chef K. discovered the 3-foot high stack of unwashed dishes (not mine - I swear! I follow the mantra of clean as you go) and made everyone go to the dish room and fix it. Which I was glad he did, becaue it really irritates me when people dump and run...it's unfair to everyone else.
Lessons learned:

They don't give cooking times in their recipes. "Until done." And the ovens don't come with windows since they're professional ranges, so it'll be a lot of guessing and checking until we get more practice.

Also, a Sharpie is your best friend - otherwise, people steal your food.

Love the blog! It's great to learn a little here and there along with you...Who knew that something as mundane and humble as the potato would be so complex? Looking forward to reading more about your adventures! Hope you don't mind me linking to your blog :)

Thanks Steph! Link away - I'm happy to share! Sorry for the delay in response and posting - I've been a little tired.