Tuesday we made pate a choux and pastry cream (praline and vanilla). Brief lecture to begin again.
Pate a choux is a a tasteless batter that is piped and filled with pastry cream. You can tell the batter is done when it looks like stalagmites and stalagtites connected in caves. 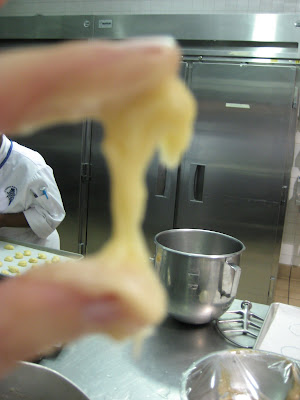 Combine water, butter, andd salt in a pot and bring to rolling boil until the butter is completely dissolved. Add flour at once, stirring vigorously until the dough pulls away from the sides of the pan (about 10 minutes, your arm will hurt). Mix on moderate speed with a paddle attachment until dough cools below 140. Beat in the eggs, one at a time until fully absorbed. Will be piped into rounds, Paris Brest (logs), or eclairs. 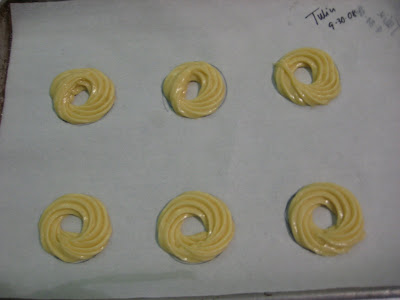 I was way more on time today - I got done plenty early with my mixing, and then the baking took way longer than to be expected. You're supposed to do about 15 minutes at 425 and then 5 at 375 to brown. You know it's done at the first oven when you can press on it and they don't collapse under your finger. Mine took at least 25 minutes. Probably because people were in and out of the ovens since I was the first in. 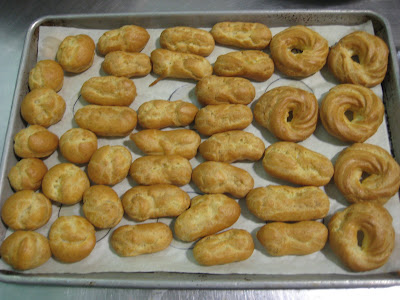 Took home some mexican wedding cookies and biscotti to give to a couple people at work.
Lessons Learned:
Practicing piping is important. Chef may not be the friendliest, but she really does help. She showed me how to stop at the end of the cookie, and then pull back up or roll around the edge so there is no tail.
Posted by T at 6:07 PM