So we're back with Chef K. I found his e-mail to us the night before class started a little odd:
Hello Everyone,

This email is to inform you about International Cuisine.
I expect everyone in full uniform when ENTERING the classroom.
This is a professional class and I expect each and everyone of you to act accordingly.
There will be class rules handed out on day 1.
Please bring your knife kit as well as a camera. The camera will serve useful for your final project.

Chef Wook Kang
Weird. It's a little harsh - our class has never shown up without full uniform, and our class had never had problems behaving professionally. This just started the road toward me questioning Chef K....
I was really looking forward to this class, especially after being forced to make all that food with cream and butter and bacon for Culinary Skills II. Finally, food I would really enjoy.
We made B'Steeya, Golden Beet Salad, Lamb Tagine, Cous Cous. Other class members also made enough Harissa and Mint Tea to share with the class.
B'Steeya 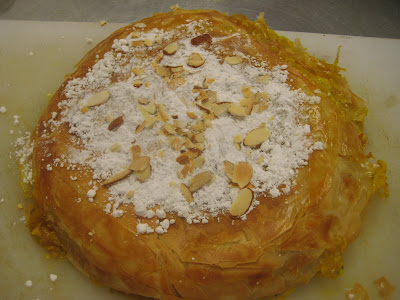 I don't remember if this is a dessert or a sweet entree, but it was good. I think it's a sweet entree. Inside the layers of phyllo dough is poached chicken, onion marmalade, egg, cream, garlic, and lots of spices. After you cook the chicken, you layer the phyllo is a pan, put in the filling, and then fold over the phyllo. Then you bake, and dust with sugar. This would be a really pretty and surprising dish to serve to guests.
Golden Beet and Pomegranate Salad 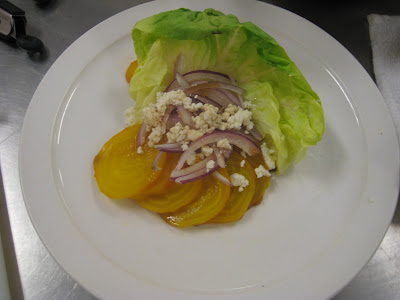 But of course they couldn't actually provide us with pomegranates. Even though this is completely the season for them.
This was the first time I had ever had beets. I know, I can't believe it either - how have I never had beets before? For some reason, mine and Nemo's took forever in the oven, and in the end, were still a tiny bit raw. After roasting them, peel with gloves on, or you will have the color on your hands for days.
Chef B (from Meat Fab) is teaching the other half of our cohort next door, and he kept coming back to eat from our salad. This is a pattern that would be repeated throughout this class - I got teased repeatedly by my friends about my ability to get along with this man that so many hated. I can't help it - in the end, I found him amusing. There are certain people, and I don't know why, but I have learned to just ignore their pompous behavior and see through to their fun side - BB is the same way. Sometimes, I could just scream over how sure of himself he is and how strict he is with ideas. But I don't. I just remove myself mentally and let him talk - it's the only way to put up with behavior like that. Anyway, people claimed Chef B loved me, and was flirting, but I don't think that was true at all - I just made an effort to talk to him about things besides food.
Anyway. This is a great salad! Boil onion, red wine vinegar, stock, pomegranate molasses, sugar and orangezest until liquid is reduced to 2T. Cool to room temp, then combine with beets. Sprinkle with feta cheese. You can use any lettuce base you would like - we were supposed to have arugula or frisee, but no surprise, my classmates did not leave enough to share even though there was plenty. So Nemo and I got stuck with plain old lettuce. Which, given that Chef K didn't really seem to be grading us except that we had completed this dish, was fine.
Lamb Tagine and Couscous 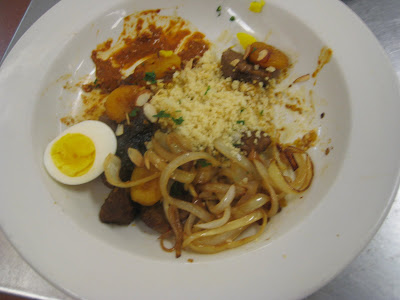 This was really good. Ha. Clearly. I obviously couldn't wait to take the photo before I started eating... It just smelled so good! Saute lamb. Remove, then sweat onions, deglaze with stock and add dates, prunes, saffron and salt. Braise with meat. Stir in honey, lemon juice, and season. Eat. Enjoy!

Lessons Learned:
I don't think this will come as a surprise to anyone, but I loved making Moroccan food. How could I not? It's a cousin of the food I grew up eating - filling tasty and healthy... Finally!
P.S. Sorry I'm 7 weeks behind. Things got a little hectic in my life. In a good way. well, except work. That still remains annoying. The schedule change for culinary school for the last three weeks was a little rough.
Posted by T at 7:21 PM