In Which I Learn How a Restaurant Works


Spring 2009, I trained for and completed the Soldier Field 10-miler, and then a month later completed my first sprint triathalon. I quit my high school psych position during my very positive evaluation in May, and finished out the last month stringing along my boss until the district I currently work for called her and informed her they had hired me. Whoops. They just got to her first, I swear, I was mulling their offer! I dated a man for longer than we should have, and subsequently broke his heart, something I get twinges of guilt about a little too frequently in my friends' opinions. I started working for a district in which I am stretched too thin across two needy elementary schools, but where my skills are valued and interests encouraged. I never thought I'd be in an elementary school, but have found I can truly help kids when I actually get to work with them... what a strange concept.


I moved out of the city, tempted by a 10-minute commute to work, and one year later, I'm going back. Screw the commute! Isn't that what podcasts and mp3 books are for?


For spring 2010, I trained for and completed a half-marathon, and then completed the same sprint triathalon, but this time with no training. Whoops again.


These days, I concentrate my culinary interests on tackling the hundreds of recipes I have saved in word documents, favorites on both explorer and firefox (across two laptops and one desktop at work), and magazine and newspaper clippings. Oh yeah, and eventually, I'll conquer my cookbooks. I'm not allowing myself to buy any new cookbooks until I finish this project. I never even enter bookstores anymore - it's too hard not to give in to the pretty pictures and daydreams of future meals... I'm also not supposed to save any more favorites, but when the majority of blogs I follow on Google Reader on foodie blogs, this is a hard line to stick to.


Anyway. Culinary School. From the world foods class, we moved on to the restaurant. The school had a tiny restaurant that was open for breakfast and dinner, and we had three rotations across the class. The first one, I was on desserts. Then I was waitstaff, and learned I am not capable of opening a wine bottle without assistance. That clearly must be improved, and I have a couple friends I think who would be willing to help me learn by drinking a bottle or two with me... The last week I was on a station I can no longer remember, except it was across from space in which I had baked my cakes...

But back to the first week, which I remember best. It was a three-member team, one person making cheddar rolls, and the other two on cakes. Yum. Cheddar rolls. We took the liberty of eating a few right out of the oven, until Head Chef caught us and we got the I'm-disappointed-in-you look. 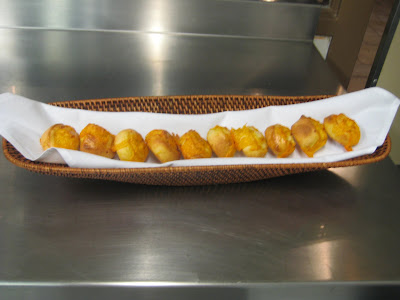 I made the individual cakes. They were gingerbread cakes with a dark beer for liquid, with a caramel pear topping. They were served with tuile paste cut into triangles, baked, and then folded over a rolling pin. Into that fold then went Gelato di Crema. And in the ice cream went caramel sticks. Salivating yet?

This is what they looked like for the final plating: 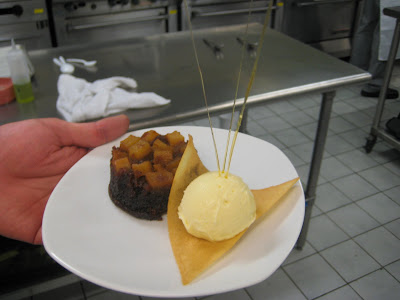 In order to make them, we poured caramel into the silver cups, topped it with sliced bosc pears, and then poured the cake mixture about 2/3 of the way. It was so odd though - I would make the exact same mixture every night, and the first night was the only night I actually got the expected 64. Every other night, it was a little short. And it wasn't just me - the Chef couldn't make it right either, and he was the head pastry chef for major hotels in Las Vegas for years! So strange. And disappointing. Clearly, I am not meant to be a cog in a machine since I can't be consistent... 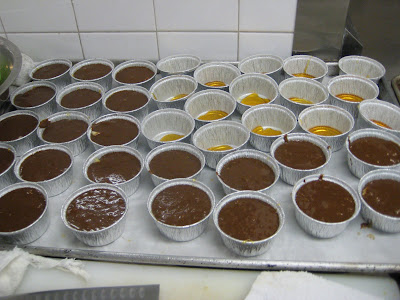 I loved making these. I handed over caramel duties to my other teammate, and poor girl, she was stuck with that the rest of the week, when she really would have liked to have a hand at the cakes. But one night she tried, and Chef wasn't happy, so I won back my spot. These would take us the entired service to create - it was a long process.
Waiting on people was interesting for me - I'd never done it before. Very kindly, some friends and family came by. Very kindly for family, since they came during a blizzard. I ended up shouting at the Head Chef because he wanted to cancel dinner service that night... there were angry words said. But polite ones. I would never swear at a supervisor. I ended up winning anyway since he couldn't get ahold of a party of 10.
The week I was waiting was tapas, and I had to memorize the English descriptions of Spanish dishes. The guy working the calamari station was my buddy, so he'd save me some when he could - there was never any left for family service at the end of the night.
The last week was Swedish dishes. I was disappointed I couldn't do desserts again, but it actually worked out since my station required only a little bit of prep and then very little clean-up. It was a salad? Clearly, it did not make an impression. But then one night I had to sub at the meat station because so many people were absent. That might have been the night of the storm. But look, so good - 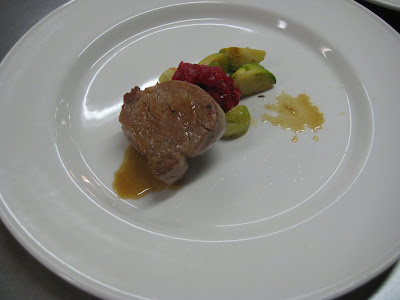 I can't remember what cut of meat it was (maybe duck?) - it was marinated in Swedish vodka. With a cranberry compote and roasted brussel sprouts.

I enjoyed working the different stations, but I was starting to get a little restless and tired of the process. That, and my body was exhausted. My migraines were happening almost daily, and I did not really enjoy taking naps in my office a couple times a week. I know, I can't believe they were giving me a positive evaluation either - but then again, they didn't really know about the naps, did they? I always managed to get the paperwork done, so what did it matter if my door was locked? No one ever ventured up to my fourth-floor closet with the view of the Sears Tower on a clear day anyway... I could never have taken this on at my current job, and for that, I am grateful to my old job.

That was my last official class. Next I did my internship, and I'll come back to explain that, maybe in another 18 months? Just kidding. It'll be sooner!